What is H2M all About?

H2M Management brings together a diverse background of business, bowling, marketing, technical, and operations intelligence.  Our technical skills are only surpassed by our passion for the sport of competitive bowling and our common desire, as friends and bowlers, to run and promote transparent events in the bowling community.

Whether you are a casual bowler, tournament bowler, proprietor, sponsor, bowling organization, membership organization, or just someone who wants to be associated with H2M Management.

Nicholas Hoagland brings a diverse background as a participant and business leader in the bowling community.  Professionally, Nick is best known as being the Lane Maintenance Director for the PBA Tour from 2001-2005 and was responsible for the design and implementation of the original PBA Animal Oil Patterns, as well as, the US Open, Tournament of Champions, and PBA World Championship oil patterns. After leaving the PBA in 2005, he became the Director of Tournament Marketing for Columbia 300 before heading to a role as Chief Operating Officer (COO) / Chief People Officer (CPO) for Backhaul Direct, LLC. Currently, Nick is the Director of Client Success at Langham Logistics in Indianapolis. In his current volunteer role as Board of Directors President of Hoosier Classic Charities, Inc, Nick presides over the successful organization and execution of the annual Hoosier Classic presented by Columbia 300 collegiate bowling tournament. In addition, Hoagland is also the Lane Pattern Development Lead for the United States Bowling Congress, managing the development of oil patterns for all USBC national championships. In his personal life, the native of Canton, Ohio is the 2001 ABC (USBC) Regular Singles Champion and is a former NCBCA Collegiate Player of the Year. Nick earned a Masters Degree in Athletic Administration and a Bachelors Degree in Sports Marketing from Indiana University-Bloomington. Nick is married (Gretchen) and has a daughter (Berri), son (Jack), along with three cats (Archie, Taylor, and Poppy Rose). 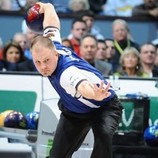 Steve Harman resides in Indianapolis, Indiana with wife Jennifer and sons Layne, Camden, and Cashton. Steve is best known for being a top-notch PBA Tour player with a career-best finish of 2nd in the 2009 PBA Don and Paula Carter Mixed Doubles event with Jennifer (Petrick) Higgins. Steve also made a run at winning the 2009 USBC Masters tournament finishing in 3rd place. To have the rights to bowl on the PBA Tour, he finished 3rd in the 2007 PBA Tour Trials and had already accumulated a PBA Regional title. Locally, Steve is the 2005 Indiana State Masters Champion, a devoted husband and father, Account Manager at Backhaul Direct, and holds the distinction of being known as "Hot Dog" by his closest friends.

Dylan is a home town boy - born and raised in the great city of Indianapolis, Indiana.  He began bowling around the age of 5 and it has stuck with him ever since.  Although normally modest regarding his talents on the lanes, he has experienced success in local, state, and national tournaments.  If you ask him, one of the greatest things about bowling is that he has developed friendships in many states and bowling communities - allowing him to stay in touch with such great people.  Dylan's professional background is based around Operations and IT.  He has served, in some capacity, as IT/Operations manager for approximately 12 years, including his current position as Chief Operating Officer at Backhaul Direct.  Some of the key highlights of Dylan's bowling career include Indianapolis USBC City Titles, Indiana State USBC Titles, Indiana State High School Individual Champion, TNBA Regional Titles, 300 Game at the 2011 USBC Open Championships in Reno, NV, and 3rd - Team All Events (With H2M Partners Steve Harman and Nick Hoagland) at the 2013 USBC Open Championships.

To enter any event, click on the above tournament page link and that will take you to the location to pay!